In addition to the speed phenotype, researchers now believe that ACTN3 may have influenced muscle metabolism. This theory was developed after researchers noticed there has been a strong recent selection for the non-functional ACTN3 X allele in certain populations (1). By studying a mouse model created by knocking out ACTN3 it was discovered that muscles lacking alph-actinin-3 uses energy more efficiently. Particularly, the decrease in glucose metabolism and an increase in beta-oxidation (2). This was coupled with the observation that patients with McArdle’s Disease (a disease in which the enzyme glycogen phosphorylase which breaks down glycogen to glucose is inactive) and the ACTN3 XX phenotype had improved exercise capacity (3). I propose to better study the role ACTN3 plays in the change in metabolic fuel found in these muscle fibers.

Hypothesis: That species in similar climates would have more similar ACTN3.

I tried to compare the ACTN3 protein sequence across several species in habitats ranging from polar and arid to temperate and tropical. I expected to see a change at amino acid 578 from Arginine to a stop codon in some of the animals found in more extreme climates (Figure 1). I did not however see this, after a literature search I discovered the the R to X mutation probably arose in the human population around 30,000 years ago (2). I also compared the domains and discovered that ACTN3 was very well conserved all the way down to the fruit fly and nematode (see protein domains). After looking at the phylogeny of animals from different climates, I concluded that the differences in ACTN3 across species were probably the result of something other than climate. 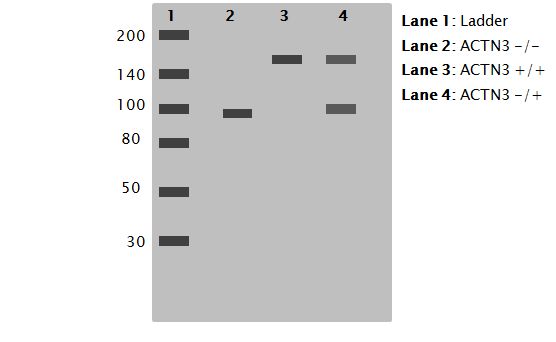 We are currently faced with the daunting task of understanding how to combat all sort of modern diseases such as diabetes, cancer, obesity, and CVD. By looking back at how certain genes functioned in the past and how those genes helped our ancestors survived we can better understand how the disregulation of these genes play a role in many modern diseases. By studying genes like ACTN3 we will better understand selective forces in our past and how, as humans, we have over come these forces. In a sense, we will gain better of understanding of what it means to be "human" and unique from our ancestors.

I think that there are several areas that would be interesting for future research involving ACTN3.

Finally, below you will find a copy of my final presentation in this class. Please feel free to contact with me any further questions or comments.