This web page was produced as an assignment for Genetics 677, an undergraduate course at the University of Wisconsin-Madison.
We are all runners, deep down in our genetic core. Granted, it may seem deeper in some than others, but even the slowest amongst us has the genetic potential to become a running champion. Yet not everyone is an Olympic caliber runner, and even amongst the Olympians some people are sprinters and others are better suited to endurance events. To understand why scientists have begun to look for which genes influence athleticism and how they’re distributed in the population.  ACTN3, one of over 200 genes linked to athletic performance, has been thoroughly studied and linked to explosive running power (1).

ACTN3: How does the gene for speed work?

Located on chromosome 11, ACTN3 is one of two genes that encodes for the highly conserved α-actin-binding proteins in the skeletal muscles. ACTN3 is expressed in fast twitch muscle fibers while the second gene, ACTN2, is expressed in all skeletal muscle fibers (2). α-actinin 3 protein is a major component of the Z-line, it connects with actin filaments to coordinate muscle contraction (Figure 1). The fast twitch muscle fibers are powered by glucose, providing power and speed. The slow twitch muscle fibers, powered by oxygen, are more efficient for slower more sustained activities (3). There are two variants of the ACTN3 gene found in the population, the R variant and the X variant.

The R variant of the gene, 577R, codes for the functional allele producing the ACTN3 protein α-actinin 3. The X variant of the gene, R577X, encodes a premature stop codon resulting in a non-functional α-actinin 3 protein (2,4). This non-functioning X variant does not result in a disease phenotype, therefore scientists believe that people with two X copies compensate by producing more ACTN2 proteins (4). Everyone has two ACTN3 alleles, inheriting one allele from each parent. You could have inherited two copies of the R variant or the X variant, RR or XX, or one copy of each variant, RX (Figure 2). People with R variants produce more ACTN3 proteins in the fast twitch muscles. The muscles used for more explosive, quick muscle contractions which makes them better suited for sprinting (2). People with the XX variants do not produce ACTN3 protein, and may produce more ACTN2 protein which increases their endurance capabilities (Figure 1). 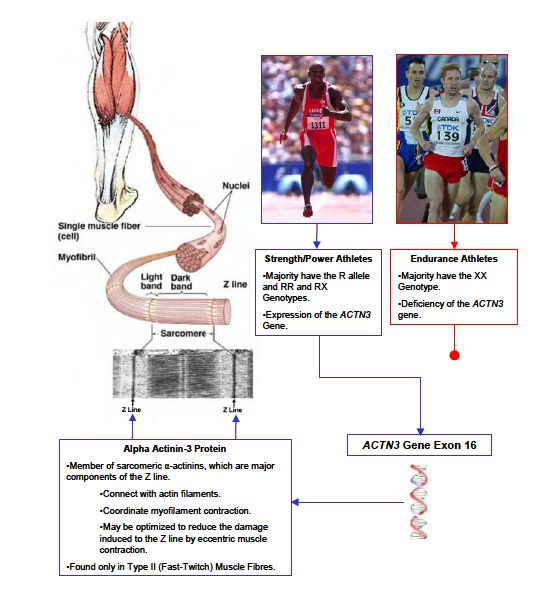 Figure 1. Depicts the location of ACTN3 on chromosome 11 and the possible variations. Genotype frequency among athletes is also shown (5).

Who has the gene for speed? 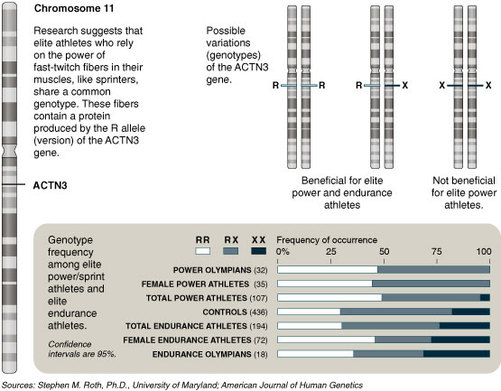 5.       Mayne I. (2006) Examination of the ACE and ACTN3 Genes in UTC Varsity Athletes and Sedentary Students. University of Tennessee at Chattanooga, Biological and Environmental Sciences

Site Created By: Kristin Kohlmann
Last Updated: 05/18/2013
University of Wisconsin-Madison
This page was produced as an assignment for Genetics 677, an undergraduate course at UW-Madison